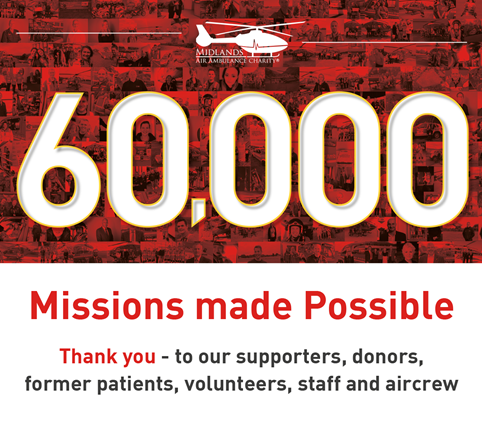 Midlands Air Ambulance Charity has now attended its 60,000th mission making the service one of the busiest air ambulance operators in the UK.

The charity’s 60,000th mission took place on Wednesday 22nd July 2020, West Midlands Ambulance Service was called to Newland Grove, Dudley at 2:00pm to reports of a cyclist who had fallen off her bicycle. An ambulance, a paramedic officer, a Midlands Air Ambulance Charity critical care car and the charity’s helicopter from Cosford with a MERIT trauma doctor on board attended. Following treatment at the scene, the patient was conveyed via land ambulance to Russells Hall Hospital.

The lifesaving charity attended 4,781 missions from April 2019 to March 2020 via its three air ambulances and two critical care cars. This represented an increase of 25 per cent year on year, and of note, during the height of the coronavirus pandemic, demand for the essential pre-hospital service did not falter.

The charity’s clinicians bring hospital-level procedures and medicines to the patient either by helicopter or rapid response critical care car. These include sedative techniques and anaesthesia, plus interventions such as advanced pain relief, enhanced airway management and surgical skills, all of which enables our critical care team to optimise a patient’s presenting condition giving them the best possible chance of survival and recovery.

Leading up to the 60,000th mission, the top five common types of incident the charity attends are:

Ian Roberts, air operations manager for Midlands Air Ambulance Charity, said: “We put the patients who need us at the heart of everything we do.

“Demand for our service does not falter, which is why we have now reached our 60,000th mission before our 30th anniversary next year. It’s clear that the advanced support delivered by the clinicians on-board our fleet of helicopters and critical care cars is needed now more than ever. Therefore, we are constantly looking to improve our operational services and provide the best advanced clinical care to those in critical need of our service.

“The addition of two critical care cars, based in Birmingham & the Black Country and Worcestershire areas, has played a crucial part in enabling us to expand our capacity to reach and treat a greater number of patients. These platforms allow us to geographically go where the helicopter would otherwise restrict us and deal with critical medical emergencies such as cardiac arrests. While demand for the essential pre-hospital service continues to rise, the pandemic has had a significant effect on the charity’s fundraising, and the organisation needs your support, now more than ever.”

Midlands Air Ambulance Charity is hosting an online bucket collection, hoping to raise £10,000 before September, which reflects the money that would have been raised at the charity’s two open days. To support, please visit: www.midlandsairambulance.com/onlinebucketcollection.

Find out more about the lifesaving work of Midlands Air Ambulance Charity by visiting the website at: midlandsairambulance.com and follow the organisation on social media.