Maureen and Steve Griffin were originally from Birmingham, but moved to Two Gates in Tamworth over 60 years ago. They spent their lives in each other’s company, and were kind to everyone they met. 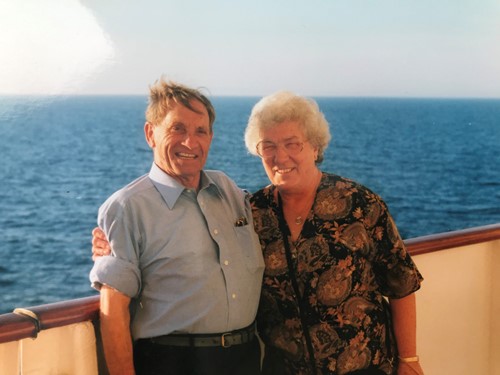 Steve had a motorbike accident when he was in his 20s, and used to recall the trauma of being transported to the nearest hospital in a land ambulance, a journey which at the time took over two hours.

As they lived close to the M42, they often saw Midlands Air Ambulance Charity attending road traffic collisions, and Stevewould comment that he wished the charity had been around for him in the days of his accident. Maureen and Steve had no children, and sadly Steve passed away a number of years before his wife. Some time after Steve passed away in 2011, Maureen moved into a care home, and lived there until she died at 89 years old.

Gillian Barron, a family friend, told Midlands Air Ambulance Charity; “Maureen and Steve were such a caring couple, they’d do anything for anyone.

“I think they saw leaving a gift in their will to Midlands Air Ambulance Charity as their way of providing a lasting contribution to the community, as they always wanted to give back and support the service. Hopefully, it will encourage others to one day do the same.” 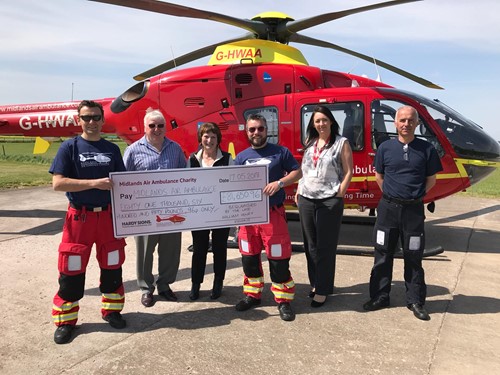 During a day out with his close friends, the late William ‘Bill’ Fielding decided he would leave his estate to his three favourite charities; Midlands Air Ambulance Charity, PDSA and St Giles Hospice. William, who passed away aged 74, kindly bequeathed £95,000 to Midlands Air Ambulance Charity in his Will, and this incredibly generous amount will now fund 38 lifesaving air ambulance missions throughout the region.

William lived in the same house that he had grown up in with his parents, in the small village of Amington in Shropshire. William never married or had a family of his own, and worked at Burgess’ in Lichfield all his life. Money never interested William – he only cared for his garden, and was still lovingly tending to his plants just a couple of weeks before he died.

William was often out and about for his job, fixing combine harvesters and other machinery on farms, which was how he came to appreciate the air ambulance and the lifesaving work that’s done on a daily basis. He would often see Midlands Air Ambulance Charity’s helicopters flying overhead to and from missions, which is why he decided to leave money in his Will.

William was very loyal and had a close group of friends who he considered his family. Two of these friends were Mick and Edith Davis, who purchased their house from William 21 years ago, and after becoming good friends, became his executors when he passed away.

Mick and Edith visited the Tatenhill airbase in Staffordshire to find out more about the emergency pre-hospital care given by Midlands Air Ambulance Charity’s flight paramedics and doctors, and how William’s generous legacy will help to fund the service, which undertakes around six air ambulance missions each day.

Mick said: “We were so proud to present the cheque to Midlands Air Ambulance Charity on behalf of Bill. We know he’d be very happy to see what a worthwhile cause his money will be going towards, and every time we see the helicopter we will always think of him.”

Ian Jones, critical care paramedic and Aircrew Team Leader at Tatenhill, added: “It was an honour to meet the executors of Bill’s Will. I was astounded to hear just how generous Bill was, and thanks to the hard work of Mick and Edith, this donation will fund many Midlands Air Ambulance Charity missions, so on behalf of our charity, the patients we treat and their families, thanks go to Bill and his legacy.

“Legacy giving funds 40 per cent of Midlands Air Ambulance Charity’s vitally important missions, and no matter the size of the donation, every penny has an impact. A flight suit costs £250, each mission costs on average £2,500 and our annual medical supplies total £75,000, so we’re massively thankful for all that we receive.”

The late James ‘Jim’ Coombes always felt Midlands Air Ambulance Charity to be a worthy cause. James, who passed away aged 95, kindly bequeathed over £75,000 the charity in his Will, and this extremely generous amount will now fund 30 lifesaving air ambulance missions throughout the region.

James lived a frugal life with his now late sister in a council house in Headless Cross in Redditch. Unfortunately, she passed away just a year before Jim, aged 90.

Jim in his earlier years had been a keen cyclist and was a life member of the Redditch Road and Path Cycling Club, over time having filled all the committee positions and finally culminating in Chairman. He cycled on the continent throughout his life, something which was a lifelong dream of his. Knowing air ambulances were often called to cyclists, further reaffirmed James’ wishes to support the charity.

Matthew Bailey and his partner, Doreen, were executors of James’ Will and knew James through his sister, Rita. Doreen was the pastoral visitor for Rita, who was a member of the Bridge Church in Headless Cross. Eventually, Doreen helped James out towards the end of his life by taking him to the hospital and generally being there to run errands for him.

Matthew and Doreen visited the Strensham airbase in Worcestershire to find out more about the emergency pre-hospital care given by Midlands Air Ambulance Charity’s flight paramedics and doctors, and how James’ generous legacy will help to fund the service, which undertakes around six air ambulance missions each day. 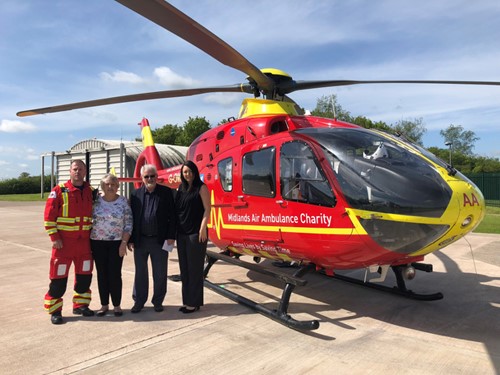 Matthew said: “We had a very enjoyable visit to Strensham to present Jim’s cheque. Whilst there, we met the team and were shown round by the pilot and critical care paramedic. They are wonderful people, who are obviously very devoted to their work with Midlands Air Ambulance Charity.”

Critical Care Paramedic, Greg Ambler, added: “It was a real pleasure to meet the executors of James’ Will, and we’re so grateful for the incredible amount donated, which will help to fund future air ambulance missions, so on behalf of our charity, the patients we treat and their families, thanks go to Jim and his legacy.”

The late Royston Edwards had a strong affiliation with the charity, after MAAC tended to him twice and airlifted him once during his lifetime. For this reason, he kindly bequest £10,000 to the charity in his Will, and funding from his legacy has now helped fund four further lifesaving missions in the region. 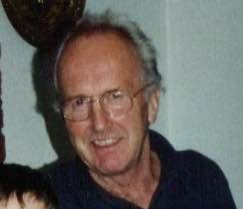 Roy, who started his working life as a car mechanic, before trying his hand at sales and estate agency, was well known and loved by everyone in his home village of Fiddington in Gloucestershire. He was always there to lend a hand and was renowned for fixing broken lawnmowers or boilers for the neighbours.

His cheeky, yet sensitive personality meant he was looked up to by many, especially his granddaughter Rebecca who was the apple of his eye. After being inspired by her ‘gramps’ Rebecca is currently studying engineering at school and is also a rising star in the go karting world.

Roy’s family visited the Strensham airbase in Worcestershire to find out more about the emergency pre-hospital care given by the Midlands Air Ambulance flight paramedics and doctors, and how Roy’s generous legacy has helped to fund the service, which carries up to eight air ambulance missions each day.

Sarah Edwards, Roy’s daughter, said: “Dad was such a kind-hearted person and always looked out for other people. It came as no surprise that he donated part of his estate to the Midlands Air Ambulance Charity, and we are extremely proud of him for doing so. Visiting the airbase was a very touching experience for all of us, knowing that dad has helped to fund the operations, and it was fascinating to find out more about the incredible work the paramedics do on a daily basis.”

Critical Care Paramedic, Jim Hancox, added: “We occasionally get to meet former patients who we’ve airlifted, but rarely do we see the families of those who have left us a legacy. It was a real pleasure to meet Roy’s family and to hear all about him. We can’t thank Roy or them enough for their support for our service, which relies entirely on the generosity of the communities we serve.”

We are fortunate to have so many passionate fundraisers and volunteers.

Graham Stokes was 80 when he passed away in July 2011 after dedicating nearly twenty years of his life to raising funds. With his beloved wife Pat Stokes beside him, the couple’s incredible charity work raised over £1million pounds for the charity.

Together they worked tirelessly, holding various fundraising events at their home and working in their local community to help raise awareness of the charity. 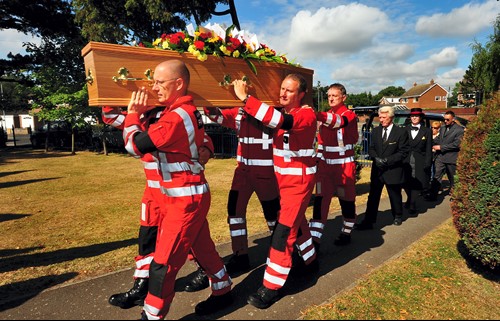 Former Executive Assistant for the charity, Ian Nicholls, read an emotional tribute at his funeral summing up Graham’s passion for the charity; “Had Mr Stokes been a stick of Blackpool rock, it would simply have read Midlands Air Ambulance Charity around the outside and in the middle.”

His wife Pat said; “He was extremely proud to be a part of the charity.”

Even in death, Graham still ensured no opportunity to help the charity was missed and the congregation were told that donations during the service would go to MAAC.

Five MAAC paramedics carried his coffin into St Saviours Church, Branston, as a fitting tribute to the man who had worked so passionately for them.

Pat has continued to fundraise for the charity and is planning future events in his memory. She said: “I’m going to carry on because the charity meant so much to my husband, it’s what he would have wanted.”

Graham Stokes, passed away in July 2011