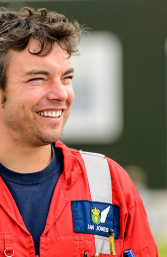 Ian Jones first joined the Ambulance Service in 1998 and since then has worked at both Cosford and East Midlands Airport.

In 2008, he was appointed Aircrew Team Leader at Tatenhill, and in 2021 became Air Operations Manager

Ian says, “Being part of Midlands Air Ambulance Charity is a privilege and I would encourage any paramedic to apply.

It’s a tough selection process but then I always say - if I managed it, anyone can!”

Away from work, Ian lives in Staffordshire with his wife Sally.