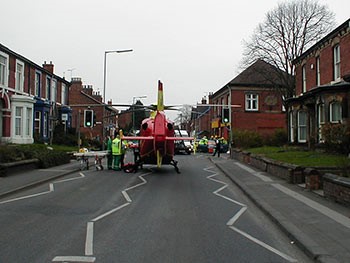 When the crew arrives, the patient is on pavement with a neck dressing that was applied by passers-by. The patient has additional smaller wounds to the ear and eye-brow, and wounds below the neck are also now apparent. Blood ++ to street.

The patient appears very drowsy; their eyes are slowly wandering from side to side. They’re unable to communicate but have a good palpable radial pulse and BP within acceptable limits.

The patient’s conscious level remains poor with E4 (but not focussing and wandering) V1 M4 (withdrawing). The crew notes that the patient is not moving the right side of body and are concerned that there is some form of left-sided vascular event, resulting in right sided cerebral signs.

The patient is 20 minutes away from a major trauma centre.

How would you manage lowered GCS and abnormal neurology?