An Evening With Stevie O'Connor

With the rising popularity of Country music in the UK Knighton Foods Limited in Adbaston will be holding a fundraiser for Midlands Air Ambulance Charity featuring UK Singer / Songwriter Stevie O'Connor at Knighton Social Club, Knighton, Adbaston, ST20 0QH on Saturday 8th June.  Tickets are £6.00 with all profits going to the charity, and can be bought at the door on the night with doors opening at 19:30. 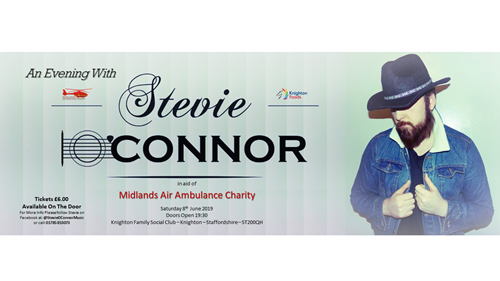 Stevie has been described as, a high energy live performer and multi-instrumentalist with a huge sound.  Signed by record label MHMG in January, Stevie is currently recording his debut album, ‘Fairway South’ scheduled to be released later this year.

Stevie will be appearing at most major UK Country festivals over the summer months, including the Main Stage at Buckle & Boots in May, FSA & Dixiefields in July, and the Main Stage at Millport Country Music Festival in September.  Stevie also has a headline theatre tour in October this year with a full band.

In the words of the organisers of Millport Country Music Festival Stevie is “Catapulting passion in every word he sings, every note he plays and embedded in red dirt Texas Country and Honky Tonk Blues”.

With his diary filling up rapidly this will be one of the few chances you will have this year to see him in such an intimate setting.

Bring your family & friends for an evening of great music, and help us raise money for a fantastic cause.