All three Midlands Air Ambulances were required at the scene of a serious RTC yesterday, in which a woman sadly died, and four other people were taken to hospital.

West Midlands Ambulance Service was called at 4:35pm (Sunday) to reports of a serious RTC on the A49 over the river in Shrewsbury. Due to the nature of the collision and the number of patients involved, the Midlands Air Ambulances from Cosford, Tatenhill and Strensham attended the scene, along with four land ambulance crews and three paramedic officers.

A West Midlands Ambulance Service spokeswoman said: “When crews arrived on scene, they found five patients, one of whom was in a critical condition. Bystander CPR was already in progress on the woman, believed to be one of the drivers, when crews arrived. The Critical Care Paramedics and Doctor from one of the Midlands Air Ambulances took over treatment and administered advanced life support on scene. But sadly, despite best efforts, nothing could be done to save the woman and she was confirmed dead at the scene.

“Meanwhile, the other air and land ambulance crews were assessing and treating the other patients involved in the RTC.

“A man, believed to be the driver of one of the vehicles, was treated for serious injuries and flown to the Major Trauma Centre at Royal Stoke University Hospital, for further treatment.

“A woman who was a front seat passenger in one of the cars, was treated for potentially serious injuries and flown to Royal Stoke University Hospital for further treatment.

“Two teenage girls were treated at the scene for injuries not believed to be life threatening. One of the girls was conveyed to Royal Stoke University Hospital by air ambulance, whilst the other was taken by land ambulance on blue lights and sirens.” 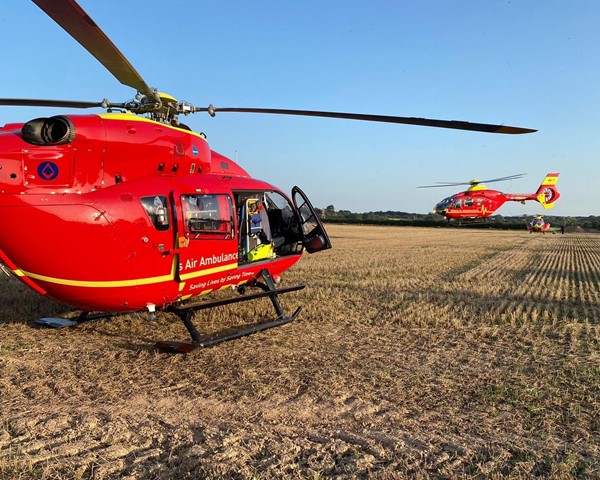