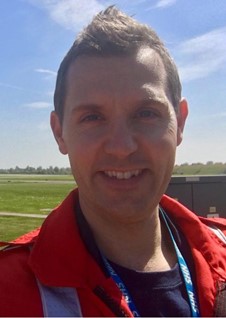 Dr Jon is a Consultant in Intensive Care Medicine & Anaesthesia in Birmingham as well as a senior prehospital doctor.

He became involved in prehospital emergency medicine as a medical student in Birmingham and has been involved ever since in treating patients and the organisation of how this is done; he has flown with MAAC since 2003.

Jon was one of the lead clinicians involved in the set-up of the regional MERIT service, chairs the Birmingham, Black Country, Hereford & Worcester trauma network board and as a member of another medical charity (Mercia Accident Rescue Scheme), he attends further emergency incidents with the ambulance service.

Jon has received a commendation from the Royal Humane Society and The Queen’s Silver and Golden Jubilee medals for his contribution to patient care within prehospital emergency medicine.

He also bakes good bread and makes his own charcuterie.