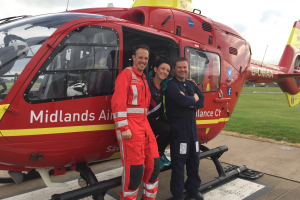 Thanks to the land ambulance crew on site, and the brave intervention of five passers-by, Natalie Queiroz was still alive, but due to the severity of her injuries, landing the helicopter close was crucial as time was of the essence. Through composure and expert pilot skills, captain Richard Steele landed on Sutton Coldfield High Street, in an area cordoned off by Police colleagues, to an on looking crowd. The landing site and close proximity played an essential role in the recovery of the patient and alighting her to hospital.

Dr Chauhan and Steven swiftly assessed Natalie. The fact she was heavily pregnant with multiple stab wounds, respiratory issues, low blood pressure and significant loss of blood meant she required urgent surgical intervention in hospital and it was their responsibility to identify the safest and quickest way to enable this.

Within just 12 minutes she was ready for the flight, and the clinical team performed all the necessary interventions in flight on the way to the most appropriate major trauma centre for her needs, the QE Hospital in Birmingham. This included managing her blood pressure and intravenous medication, as well as providing reassurance and a hand to hold.

Land ambulance paramedics at the scene and the aircrew in flight received support from critical care paramedic, Karen Baker on the trauma desk based at West Midlands Ambulance Service, who liaised with the hospital to ensure the most appropriate teams would be on hand to receive the patient.Due to this support, on their arrival Dr Chauhan was able to brief a team of obstetric surgeons, a neonatal team, an anaesthetic team and an intensive care team as well as cardiac and general surgeons.

The swift handover meant Natalie was given blood within minutes and an emergency c-section was performed in theatre alongside major surgery to repair damage to her heart, lungs, liver, wrist and abdomen.

After the c-section, the baby girl was put on a ventilator in special care and was woken up four days later and was said to be doing well.

Mother and baby spent a number of weeks in hospital before returning home. Natalie is still undergoing treatment as an outpatient, and her strength and bravery is admired by all who meet her.

The excellent communication between all the clinical teams involved and swift decision making under pressure played an extremely important part in saving the lives of both patients. A few minutes extra would easily have resulted in a different outcome for both mother and baby.

Natalie said: “When my attacker was eventually pulled off me I knew I was in a really serious condition as I was heavily bleeding from many areas, including my chest, stomach and the main artery in my wrist - which had been slashed in the attack.

“I remember being told the air ambulance was coming in for me and I felt relief that I would be getting medical help fast. The crew on the air ambulance kept me calm and reassured, despite the fact I was struggling to breathe. As I was dashed by the crew into the resuscitation unit in the QE, I remember thinking ‘thank god I’m here as I can’t fight on any longer’. I sustained in total 24 stab wounds to vital areas of my body.

“My baby and I would not be here today if it was not for the Midlands Air Ambulance; and my other two daughters would not have their mum or little sister. Thank you will never be enough.”