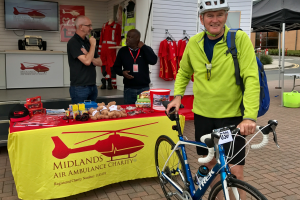 On a warm spring day in May 2016, Paul Williams hopped on to his bicycle and cycled to Cannop in the Forest of Dean.

Passing by a professional bike company display, Paul aged 64, spotted a new model of bicycle and decided to test it out.

As an experienced cyclist, Paul didn’t think twice about trialling the bike on ‘The Verderers’ route in the Forest of Dean, a route he knew well. However, just a short time later Paul would find himself in a life-threatening situation requiring the help of the Midlands Air Ambulance.

Paul explains: “Being a keen cyclist and very fit at the time I quickly climbed up to the highest point and after stopping to take a photograph, set off on the descent.

“I can remember being quite cautious as the bike handled differently to my own, but it rode well over the series of small but sharp bumps in the track.

“I don’t remember anything after this point, but a few hundred metres towards the end of the track I had a very serious accident.”

Paul who was cycling alone, was thrown from the bicycle suffering a fracture to his skull, a break to his right elbow, and the impact caused his right leg to push through his pelvis.

An off duty junior doctor came across Paul and was able to assess his injuries and stay with him until an ambulance arrived. The land ambulance crew quickly realised the extent of Paul’s head injury and called for the Midlands Air Ambulance from its Strensham airbase.

Once on scene, a doctor and critical care paramedic Colin Apps intubated and monitored Paul for a short time to ensure he was stable enough to be airlifted to hospital.

Once stabilised, the aircrew made the decision to fly Paul to the most appropriate hospital for his injuries, Bristol Southmead. A journey which would have taken over 50 minutes by car, took just ten minutes by air. This faster journey allowed Paul to receive lifesaving surgery to his skull and brain sooner.

Paul recalls: “After a week of being in hospital, I would wake for short, disoriented spells. I required further operations to put my right leg in traction using a pin through my knee, and also to wire my elbow back together. As soon as my legs were equal length, my right pelvis was repaired using titanium plates and screws.

“Then followed a period of recuperation and setbacks during which I managed to contract sepsis and pneumonia. Antibiotics saved me this time and eventually I was well enough to transfer to Gloucester Royal, which was closer to my home.

“Unfortunately, another setback occurred as I contracted meningitis and had to be rushed back to Southmead. A worrying time, as it was eventually discovered that I had a breach through a small hole into my skull, at the bridge of my nose.”

Paul continues: “Over 15 months since my accident, I still have a long way to go with my recovery. Mentally I am quite different, I tire quickly and get confused and irritable. I am scared of things that never bothered me before the accident such as cycling in riskier situations on and off road, and I really hate being a passenger in the car.

“Physically I am getting stronger every day and I have wanted to do some fundraising for the charity, so when I won two tickets to take part in the Rybrook BMW Classic Bike Ride in Worcester, I just had to take part.

“I completed the 25-mile charity bike ride in Worcester at a decent pace and my wife and I are planning to walk 1,000 miles each this year, sponsoring each other 50p a mile. We are also going to do some car boot sales.”

“I don’t know what the future holds for me but hopefully it’s further improvement. One thing is for certain though, without the Midlands Air Ambulance, I wouldn’t have had a future at all.”