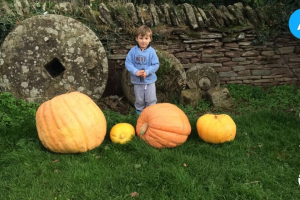 A freak accident with a tractor crushed Tim’s right foot, leaving him in a critical condition and requiring urgent expert care.

Within minutes, a local First Response unit arrived on the scene closely followed by an ambulance.

The Midlands Air Ambulance from Strensham with critical care paramedics Colin Apps and Mike Smythe on board was dispatched to the scene due to the severity of Tim’s injuries.

Tim says: “I was in a huge amount of pain but vaguely remember voices talking around me and hearing the helicopter coming in to land.”

The nearest hospital to Tim’s farm was Hereford County Hospital, but the aircrew knew he required the expertise of a Major Trauma Centre.

Colin adds: “Tim had dislocated every bone in his right foot and badly torn the skin. We knew his injuries were extremely severe and we had to get him to a specialist.

“Whilst on scene, we administered strong pain relief to stabilise Tim before we could fly him to hospital.”

Tim was flown to the closest Major Trauma Centre, University Hospital Coventry, in just 15 minutes, a journey which would have taken over 90 minutes by land.

Tim explains: “I was aware that my situation was serious but after receiving the strong pain relief from the aircrew, I don’t remember too much about my journey to hospital.”

Tim spent over a month in hospital, undergoing ten operations to save his leg including two large skin grafts.

Tim adds: “When I first arrived at the hospital, doctors weren’t sure if I would be able to keep my leg, but I begged them to do all they could.”

Ten months later Tim’s recovery is ongoing and he is unable to return to his duties on the farm.

His family has sold pumpkins grown on their farm at auction to raise money for the charity, an initiative Tim had started before his accident.

Tim concludes: “It is true what they say, you really never know when you may need an air ambulance. I had started growing pumpkins to auction off and raise money for them just months before I was airlifted. I’m pleased my family have been able to continue with the fundraising whilst I’m recovering.

“The accident dramatically affected my life, but I know that without the response of the air ambulance, I could have lost my leg that day, or worse.”