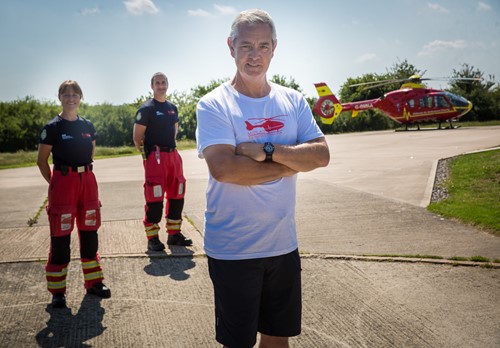 Chris Devney attended many road traffic collisions during his former life as a police officer whilst stationed in Telford, Shropshire, meaning he crossed paths with the Midlands Air Ambulance Charity aircrew and saw first-hand their clinical expertise which saved lives on multiple occasions.

In 2010, Chris was sadly also involved in an RTC whilst out riding his motorbike. The local air ambulance charity was deployed to the scene, Chris says of the incident: “I remember drifting in and out of consciousness. Hearing the familiar noise of a helicopter’s rotors approach was the most heartening sound and gave me the confidence that I was going to be okay.

“Midlands Air Ambulance Charity provides a vital service but also needs donations to keep flying. I wanted to challenge myself and decided any money I can raise will be donated to this lifesaving cause.”

Chris Devney, who also regularly volunteers for Midlands Air Ambulance Charity, will be walking 100km between the charity’s RAF Cosford airbase in Shropshire and its Worcestershire airbase in Strensham. He will embark on his journey on Saturday 11th July 2020 at 7pm and should hopefully arrive at Strensham the following evening.

There is an open invitation to anyone who wants to join Chris en-route (socially distancing, of course), whether that be for a few steps or a few miles. Chris will be easily trackable via his Facebook page: Facebook.com/100kmwalkforMAAC

To help support Chris during his 100km walk for charity, you can visit his JustGiving page: justgiving.com/fundraising/christopher-devney

Jo Bailey, area fundraising and events manager, says: “A number of our popular fundraising events, such as Walk4Life, which was due to take place in May had to be postponed. Undertaking this kind of challenge, especially during the current climate, is commendable and the charity is very thankful for people like Chris who go above and beyond to help us raise the funds we need to continue saving lives.”