Bike4Life Ride Out and Festival Raises £82,000 for MAAC

The ninth annual Bike4Life Ride Out and Festival took place on Sunday (28th April), and an incredible £82,000 was raised for Midlands Air Ambulance Charity. 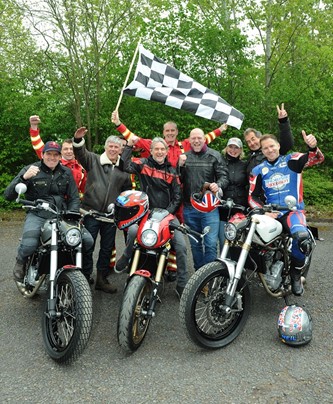 VIPs Carl Fogarty, Steve Parrish, Mike Tindall, Neil Hodgson, Dougie Lampkin and the Emergency Bikers Mark Hayes and Steve Forrest led the 3,500-strong group of bikers from Meole Brace in Shrewsbury to a Festival at RAF Cosford, where a crowd of around 10,000 supporters greeted them.

The event, which was in partnership with Safer Roads Partnership and supported by CCM Motorcycles, also hosted performances from Extreme Bike Battle, and motorbike incident demonstrations from Midlands Air Ambulance Charity aircrew.

Amongst the action were corporate supporters, NEC Group, who have this year named Midlands Air Ambulance as their charity of the year, and joined the Ride Out as part of their many fundraising activities.

Visitors to the Festival also saw exclusive interviews with all the VIPs on stage, as well as meet and greet opportunities next to the Midlands Air Ambulance Charity helicopter.

Jo Bailey, events and area fundraising manager for Midlands Air Ambulance Charity, said: “This was another fantastic Bike4Life event, and despite the high winds and bad weather the day before, we still received a massive amount of support and donations. It is a testament to the work of our staff and volunteers and the incredible support and generosity of the biker community.

“This brilliant amount raised will fund over 30 lifesaving missions, and will ensure that Midlands Air Ambulance Charity can continue to save lives across the region.”

The event took a year of planning and wouldn’t have been possible without the support of; Safer Roads Partnership, Highways England, West Mercia Police, Shropshire County Council, ROSPA, Shropshire, Staffordshire & Cheshire Blood Bikes, Raven Riders, Wrexham Riders, Oddballs MCC, Midland Freewheelers, SAMMS, Kelly’s Road Sweepers, RAF, Police and Army Cadets, the RAF Museum Cosford and RAF Cosford who gave their time for free. Organisers would also like to thank other local residents and road users for their patience and understanding during the Ride Out procession.

Keep up to date with Bike4Life on social media by following @Bike4LifeFest on Facebook and Twitter, or visit bike4lifefest.com