Midlands Air Ambulance Charity’s former chairman, Brendan Connor from Solihull, has been named in the Queen’s New Year’s Honours List with the Order of the British Empire (OBE). 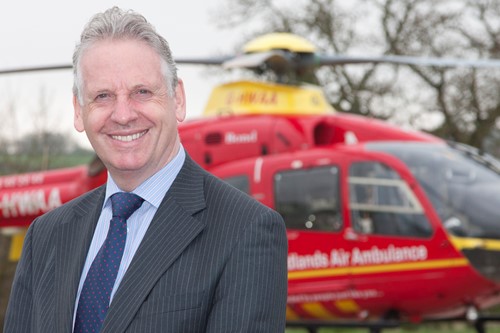 An OBE is presented to individuals in recognition of their contributions to the arts and sciences, work with charitable and welfare organisations, and public service outside the civil service.

His outstanding contribution to the community most notably included his chairmanship of Midlands Air Ambulance Charity, a position he held for seven years, until 2018. During his tenure the charity became independent from the NHS, purchased two new state of the art Eurocopter helicopters and raised over £10m annually to fund the service from its three airbases at RAF Cosford in Shropshire, Strensham in Worcestershire and Tatenhill in Staffordshire.

Commenting on the honour, Hanna Sebright, chief executive for Midlands Air Ambulance Charity said: “Brendan joined our organisation in 2011 as our first independent chairman, not long after we separated from the ambulance service and became an independent charity. It was a challenging yet rewarding transition period and his strategic guidance from that point led us to become a strong and robust pre-hospital service, delivering advanced clinical care at the incident scene to thousands of people in critical need each year.

“I am thrilled his immeasurable contribution to our service and several other deserving causes has been recognised in such a formal way, it is thoroughly deserved.”

On receiving the news late December 2020, Mr Connor said: “I am delighted to accept this honour which came as a great surprise! Being chair of Midlands Air Ambulance Charity was an enormous privilege and honour; but the provision of the service to those in dire need could not be sustained without the boundless generosity of the wider Midlands communities every year. Long may it continue!”

To find out how you can help to fund a lifesaving mission with Midlands Air Ambulance Charity and get involved with the Air30 anniversary celebrations, please visit: midlandsairambulance.com and follow the organisation on social media.