It’s Up, Up And Away As Santa Brings His Sleigh To Strensham For Midlands Air Ambulance Charity

It’s the return of the Midlands Air Ambulance Charity’s annual Christmas party for children aged 14 and under on Sunday 15th December at the organisation’s Strensham airbase in Worcestershire.

Midlands Air Ambulance Charity’s Young Heroes Christmas Party, is a chance for youngsters aged 14 and under to attend, whether they’ve been airlifted by or fundraised for the service. The event aims to recognise and celebrate the charitable nature of young fundraisers and the bravery of those who have been airlifted by the service, especially as the charity treats a child every two days, on average.

This year, the party will take place on Sunday 15th December at Midlands Air Ambulance Charity’s Worcestershire airbase in Strensham. There will be games and goodie bags galore with refreshments, entertainment and the chance to be reunited with the crew who tended to those who were airlifted. Father Christmas is also set to make an appearance. 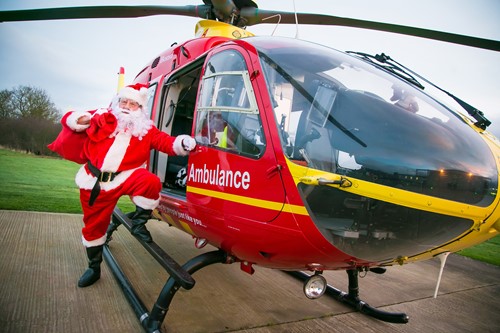 Santa Claus, lead giver of gifts, North Pole said: “I’m impressed with the charity’s aircrew, who unfortunately tend to a child every other day, to save lives. I’m immensely proud of all of the children who have helped keep the service going with their fundraising activities and to all those who were very brave whilst being airlifted.”

Emma Gray, fundraising and marketing director for Midlands Air Ambulance Charity, said: “We are embracing the Christmas spirit by giving back to those that help us give the gift of life. We also want to give the aircrew the opportunity to check-in with youngsters who they have airlifted and see the impact their lifesaving skills have made to patients’ recoveries.”

Midlands Air Ambulance Charity wants to hear from you, if you’ve fundraised for the service (no amount is too small) or have been airlifted, you can get in touch with the charity and register your interest in attending the Young Heroes Christmas Party.