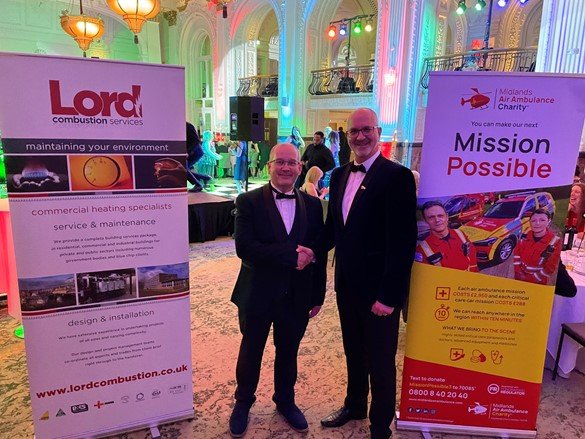 Lord Combustion Services raised a contribution equivalent to the funds needed for three air ambulance missions and five missions in the pre-hospital service’s three critical cars. The amount was raised through generous donations at a dinner held at Birmingham’s Grand Hotel on Saturday 5th November which celebrated the company’s 40th anniversary year.

In total, 120 staff, suppliers, clients and business partners attended the event to mark four decades of progress by the business, which is located on Dudley Road East, Oldbury. The funds were raised through ticket sales, a charity raffle, casino games and an auction.

Having opened for business in 1982, Lord now has a team of 45 engineers and support staff, delivering services for more than 1,000 sites across the Midlands, including 300 schools and hundreds of health sites.

It has been recognised for its work on sustainability and environmental impact having successfully delivered significant retrofitting heating and hot water projects for the likes of the landmark Edgbaston Stadium in Birmingham.

Managing director, Stuart Smith said: “Our team were pleased to play their part in supporting such a good cause.

“Working across the West Midlands to deliver high quality services for clients for 40 years, we appreciate the area which is covered by Midlands Air Ambulance Charity and the importance of their work every day.

“As we look forward to building on our heritage, we wanted to give back to a lifesaving cause. We were delighted so many of our generous guests supported our fundraising efforts at such a wonderful occasion, which was enjoyed by everyone who attended.”

Jon Cottrell, senior partnership executive for Midlands Air Ambulance Charity attended the Charity Ball and said: “On behalf of all crew and staff at the charity, we really appreciate the support from local businesses based within the communities we serve, just like Lord Combustion Services, who continue to be a valued corporate supporter. The money received by our charity will help make three helicopter missions and five critical car missions possible.”

As well as speeches by Stuart Smith and Jon Cottrell, the Charity Ball also included a performance by Soul band, Soul Motion, and a DJ playing hits into the early hours.

Last year Lord was recognised for its achievements in reducing clients’ environmental impact by winning the sustainability trophy at the West Midlands Business Masters Awards. At the 2021 Black Country Chamber of Commerce Awards, Emma Tibbetts won Director of the Year and Lord was named Service Business of the Year. In April 2022, the company made the Net Zero Business Pledge to reduce their environmental impact during a visit by West Midlands Mayor Andy Street.

To find out more about Midlands Air Ambulance Charity’s pre-hospital emergency service, visit the website and follow the organisation on social media.