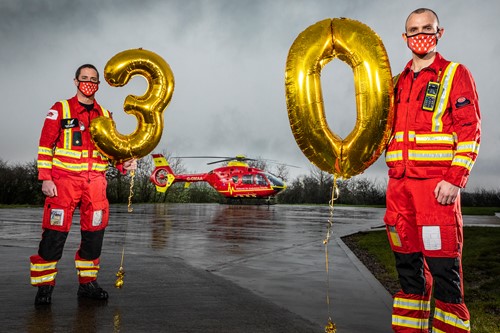 While the charity is facing up to 50 per cent reduction in community fundraising income this year due to the pandemic, throughout 2021 Midlands Air Ambulance Charity will be running a series of activities to commemorate 30 years of providing advanced pre-hospital emergency care across the Midlands.

As one of the first air ambulance services in the country, named ‘Air5’ with just one helicopter flying out of a temporary airbase five days a week, Midlands Air Ambulance is proud of its heritage. The charity now has three helicopters and two critical care cars serving a population of six million people, and to date the service has responded to over 62,000 missions. The critical care paramedics and doctors support land ambulance crews by bringing advanced skills, medicines and equipment to the incident scene, giving those critically ill and injured the best possible chance of survival and recovery.

To mark the launch of ‘Air30’, with social distancing in place and following Government guidance, Midlands Air Ambulance Charity started 2021 by launching its first commemorative initiative by inviting local people in the communities it serves to get involved in the Air30 Airbase Challenge to raise vital funds and make future missions possible.

In addition, the charity is introducing 30 ways* in which local people and businesses can support the lifesaving service.

Hanna Sebright, chief executive for Midlands Air Ambulance Charity, states: “Air30 is an important milestone year for the charity, and while the past year has been exceptionally challenging for our charity in terms of increasing demand for the service and reduced fundraising income, we are determined to commemorate the year with the communities we serve.

“As a result of the long term, loyal support we receive from people and businesses based within the local communities, we have been able to continue to develop our clinical expertise over the last 30 years. This includes increasing our doctor-led cover across the region and expanding our fleet of, which now includes three helicopters and two critical care cars, with advanced critical care paramedics and doctors treating patients in their critical hour of need.

“We are extremely fortunate to have received such support over the past 30 years, and we never take this commitment for granted. We solely rely on the public’s support and generosity for our daily missions and would encourage you to find out how you can get involved in our Air30 anniversary celebrations and help keep our service operational for future years to come.”

To find out how you can help to fund a lifesaving mission with Midlands Air Ambulance Charity and get involved with the Air30 anniversary celebrations, follow the organisation on social media: