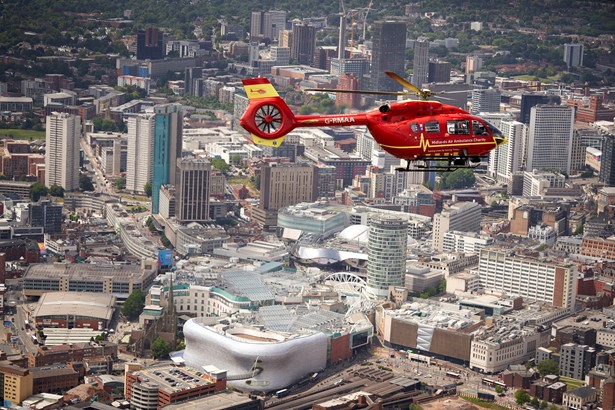 A West Midlands charity is predicting a rise in demand for its vitally important pre-hospital emergency service with more than one million people[1] expected to descend on the region for a summer of sport.

Midlands Air Ambulance Charity, which rapidly reaches and treats up to 12 patients every day in the region, believes the increase in tourists and sports fans in the area during July and August will result in a greater number of call outs to those suffering a serious medical emergency or trauma-related incident.

But the charity is reassuring the public that it has the capability and resource to handle the predicted rise in mission numbers.

Karen Baker, clinical services manager for Midlands Air Ambulance Charity, said: “The six counties we cover have a population of more than six million people in total and one of the busiest motorway networks in the country, so we are used to dealing with a number of incidents of a severe nature every single day.

“We are looking forward to the region’s summer of sport and it will be a great boost to the Midlands’ tourist industry and economy. An additional one million people are expected in the area in the coming weeks, and we predict that we could be tasked to a further two to three potentially life-threatening incidents each day. With three air ambulance helicopters and three critical care cars on standby, with advanced clinical teams on-board, we would like to reassure the communities we serve that we have the ability and capacity to take on these additional call outs and will continue to rapidly provide enhanced care to patients in the region when they need it most.”

Midlands Air Ambulance Charity relies on donations from the public and local businesses to fund its daily missions. Each air ambulance mission costs £2,950 and each critical care car mission cost £288. To support this essential service in your area, donate now.

To find out more about Midlands Air Ambulance Charity, and how you can support the organisation with future lifesaving missions, visit the website and follow the charity on social media.