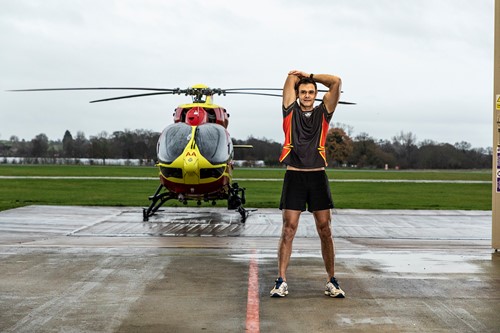 The Air30 Airbase Challenge, which saw participants take on the virtual distances between the charity’s three airbases raised in excess of £65,000 for the rapid response service, making a phenomenal 67 vital lifesaving missions possible – 22 in the charity’s air ambulance helicopters and an additional 45 in the service’s two critical care cars based in Birmingham and the Black Country, and separately in Worcestershire.

The total of more than £65,000 was raised via registration fees, fundraisers’ JustGiving pages, Gift Aid and donations sent directly to the charity.

The result was achieved by individuals and teams, totalling more than 400 people, signing up to the physical challenge. 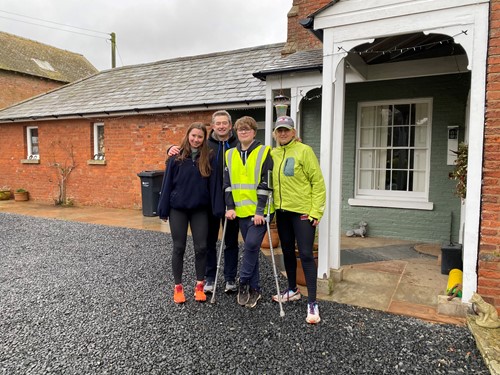 (Image caption: Former patient, Henry Carpenter, raised £10,021 on his own by completing the 54-mile walk whilst on crutches following an incident with a tractor.)

Henry Carpenter, 15, from Herefordshire, a former patient of the service, raised £10,021 on his own by completing the 54-mile walk whilst on crutches following an incident with a tractor, leaving him in desperate need of the advanced care of Midlands Air Ambulance Charity.

Emma Gray, chief operating officer for Midlands Air Ambulance Charity, said: “On behalf of everyone at the charity, I would like to say a huge thank you and congratulations to all those who got involved with our Air30 Airbase Challenge.

“As a charity which relies solely on the generosity of the local communities it serves, not one of our missions would be possible without the support of those who signed up to take part, for that we are truly grateful.

Stephen Mason, critical care paramedic for Midlands Air Ambulance Charity and team captain for the 121-mile distance, added: “I have thoroughly enjoyed playing a part in this phenomenal challenge, and helping to engage supporters with our lifesaving pre-hospital emergency service.

“Thanks to absolutely everyone who got involved, without you, our daily missions and saving lives of some of the Midlands most critically ill and injured would not be possible.”

To find out more about all other anniversary activity available with Midlands Air Ambulance Charity, visit the 30 Ways To Help webpage and follow the organisation on social media.