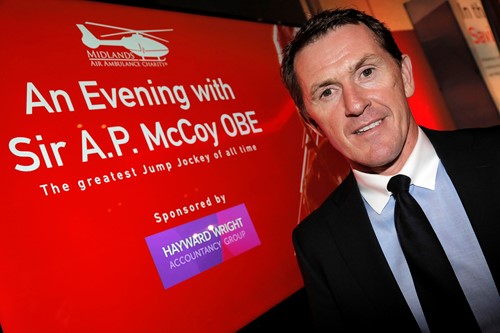 On Friday 23rd November, racing fans gathered at the Belfry Hotel and Resort for an exclusive evening with champion jockey Sir AP McCoy, and raised over £30,000 for Midlands Air Ambulance Charity.

Guests were welcomed by sports broadcaster and Talk Sport presenter Rupert Bell, before enjoying a three-course meal. Sir AP then took to the stage for an intimate Q&A hosted by Sky Sports Presenter Emma Spencer.

Tickets for the evening and proceeds from a raffle and auction on the night contributed to over £30,000 being raised for Midlands Air Ambulance Charity, which will fund 12 future lifesaving air ambulance missions.

“We would like to thank everyone who supported the event, and helped to raise such a fantastic amount of money, particularly the sponsors Hayward Wright.”

Sir AP McCoy adds: “It was a really enjoyable evening, and a pleasure to support such a worthwhile cause.”