Take Off For Ambulance: Code Red On Channel 5 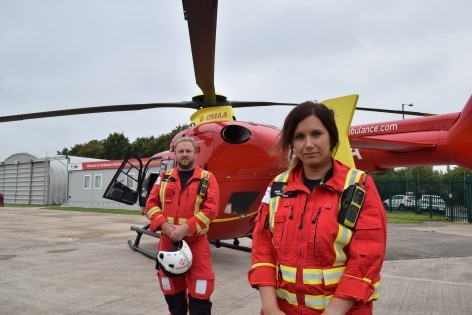 They go to some of the most serious and time critical cases in the West Midlands and now you can see how they work with ambulance crews to save lives.

On Monday evening at 9.00pm on Channel 5, the critical care paramedics and doctors who work with West Midlands Ambulance Service and Midlands Air Ambulance will be featured in a brand new series called ‘Ambulance: Code Red’.

Filmed before the corona virus pandemic, the series follows the staff as they support the ambulance crews at the scene.  It looks at the critical care paramedics who operate on a car during the day and then the MERIT trauma doctor and critical care paramedic team who fly on the Midlands Air Ambulance based at RAF Cosford during the day and operate on a rapid response vehicle at night.

In the first episode, the teams work to treat a man who suffered a fit and went into cardiac arrest; a child who has been knocked over by a car; a woman who has been thrown from her horse onto a concrete path; an elderly woman who has fallen over in her home badly breaking her ankle; and a car that somersaulted and collided with a lamppost.

West Midlands Ambulance Service Chief Executive, Anthony Marsh, said: “This programme gives a real insight into the support that our CCPs and doctors can give to our ambulance crews who are dealing with some of the most complex patients.

“It demonstrates how they work with the crews on scene to use their enhanced skills to benefit patients.  Without the work of the staff on scene, the teams wouldn’t be able to use those skills, so it really is all about working together.

“The teams provide critical care at the scene that save lives, brains and limbs, including pre-hospital surgery and pre-hospital anaesthesia.”

Critical Care Paramedic Tom Waters, who is featured throughout the series added: “It’s a really challenging role but really rewarding.  We work with the staff in our control rooms to make sure patients get to the specialist care they need for example major trauma centres and cardiac care units, often bypassing the local hospital.

“Our role is very much to work alongside ambulance crews, not take over from them.  By working with them, we are able to ensure patients get the best are possible.”

“The pre-hospital doctors and critical care paramedics on-board the helicopters and critical care cars bring specialist skills, advanced medicines and procedures to an incident scene and work together with colleagues in the ambulance service to give the patients the very best chance of recovery and survival.”