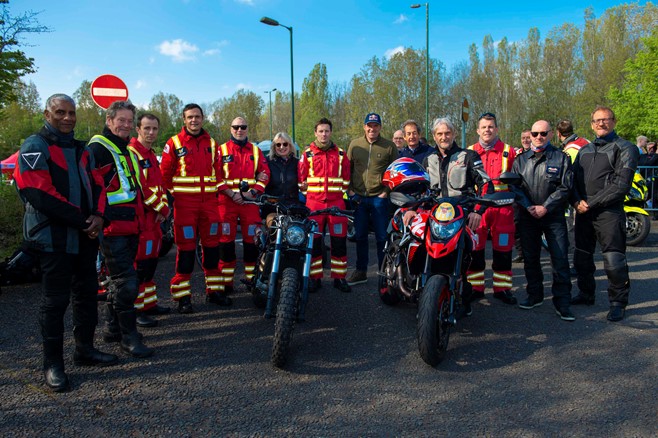 (Image caption: Members of Midlands Air Ambulance Charity's aircrew, senior leadership team and board of Trustees with biker VIPs ready to lead the 2022 Ride Out.)

3,500 motorcyclists and hundreds of pillions took part in the annual organised 23-mile route from Meole Brace, in Shrewsbury, to one of the charity’s three operational airbases at RAF Cosford, in Shropshire. The event, which took place late April, was the most successful yet, helping to raise the six figure sum for Midlands Air Ambulance Charity. This means that 31 air ambulance and an additional 30 critical care cars missions have been made possible.

The event, which was officially sponsored by the RAC, was supported by a number of famed VIPs including:

Emma Gray, chief operating officer for Midlands Air Ambulance Charity, said: “Since its humble beginnings in 2010 as a small ride out, now in its tenth year, Bike4Life has grown in popularity and support, and we have now reached a record number of riders, festival goers and lifesaving missions funded by the event.

“Road traffic collisions made up a third of the incidents our clinical crew attended in 2021, and sadly a great number of these involve motorcyclists in time critical need of rapid, advanced clinical intervention. We are truly grateful for the support shown by the biker community at Bike4Life and are truly amazed by their kindness and generosity, which has helped fund future missions for our rapid response, pre-hospital service”

Find out more about Midlands Air Ambulance Charity via the website and follow the organisation on social media.