The Grass Is Greener For Midlands Air Ambulance Charity 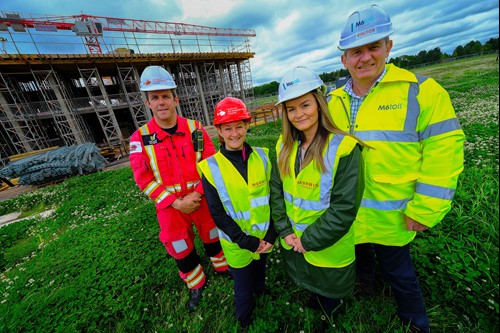 M6toll, one of Midlands Air Ambulance Charity's longstanding corporate supporters will be partnering with the charity on the development of the employee wellbeing garden at the new airbase headquarters facility currently being constructed in Cosford, on the Shropshire / Staffordshire border.

The charity's new facility, which has been four years in the planning, will enhance its pre-hospital helicopter-led emergency medical service. It'll feature a purpose-built environment for crew and charity staff including main offices, warehousing and storage, advanced clinical simulation training room and space for two aircraft and critical care cars to allow the charity to expand its service in the future. It will complement the charity’s existing service across the six Midlands counties it covers, providing benefit to those unfortunate enough to suffer a traumatic injury or illness.

Sarah Loizou, HR and business services director for M6toll, said: “While statistically the M6toll road is one of the safest motorways in the UK, we're always grateful for the lifesaving support of Midlands Air Ambulance Charity when incidents do occur. We understand these missions can be harrowing for the aircrew that have been called to the scene and why it's so important they have somewhere peaceful they can visit where they can reflect. The staff garden will be the perfect place for them to take some much-needed time out and we couldn't be happier to fund the build of this vital space."

Pam Hodgetts, corporate partnerships manager for Midlands Air Ambulance Charity, added: "The garden will be a key feature at our new airbase - it'll be somewhere tranquil for our crew to spend time after they've been called out to a lifesaving mission, and for employees to relax after a hard day of fundraising. We're thankful to M6toll’s support on the development of the garden which will become one of the most important facilities at our new airbase."

Construction started at the Neachley Lane site in Cosford in March 2021 and the project is expected to be completed in early spring 2023.

Find out more about M6toll here