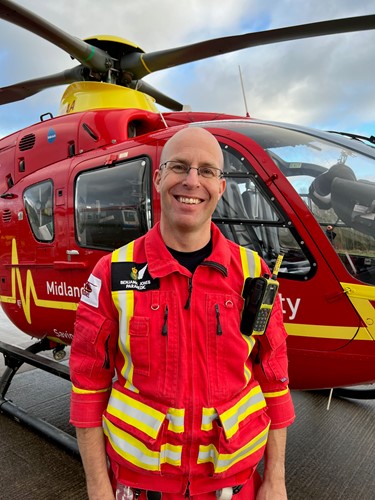 People of all ages are being asked to get active in the New Year by signing up for Midlands Air Ambulance Charity’s popular Airbase Challenge event.

The event is a great physical challenge for those thinking about their New Year's resolutions and the positive improvements they can make to their lives and that of others during 2022.

The upcoming Airbase Challenge, which launched on 1st January 2022, asks supporters to pick one of four distances – ranging from 27 to 121 miles – representing the distance between the charity's three airbases; Tatenhill Airfield in Staffordshire, RAF Cosford in Shropshire and Strensham Services on the M5 in Worcestershire.

To keep in line with Government Covid-19 guidance, participants can choose how, where and when they complete their chosen distance. Those taking part can complete the challenge as an individual or as part of a team of four, and can opt to run, jog, walk, swim or cycle. People have 30 days to complete their challenge once they have started.

­Now in its second year, Midlands Air Ambulance Charity is urging the region's supporters to get behind this year's Airbase Challenge.

Emma Wood, head of fundraising and marketing for Midlands Air Ambulance Charity, explains: “We had a phenomenal turnout for our Air30 Airbase Challenge during our inaugural year. More than 400 supporters took part and collectively they raised more than £65,000 via registration fees, online fundraising pages, Gift Aid and donations sent directly to us – enough to fund an incredible 41 lifesaving missions.

"We've set last year’s success as our target to beat this year, so anyone out there who's already thinking about their 'new year, new me' regime should register to take part. Not only will they improve their fitness, but they'll raise much needed funds for our lifesaving service at the same time."

Anyone who enters will be assigned a team captain - a member of Midlands Air Ambulance Charity's aircrew - whose job it is to keep them motivated and provide support while they're on their fundraising journey. It costs just £5 for individuals to enter or £10 for a group of up to four people. Individuals who raise £75 in donations, or £100 as a team, will receive a commemorative medal.

The Airbase Challenge will run until Tuesday 31st May, with participants able to complete the challenge in any 30-day period between the starting and finishing dates.