Will Mellor and Ed James To Host MAAC’s Ball

Actor and television personality Will Mellor and local radio legend Ed James, have been announced as co-hosts of Midlands Air Ambulance Charity’s Recognition Awards and Charity Ball, and they are inviting you to join them in the night of celebration. 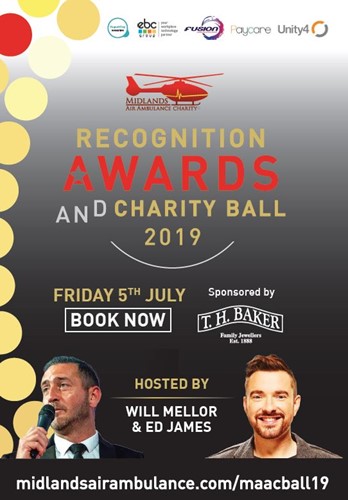 The event, which is now in its eighth year, will be held at the Vox Conferencing Centre in Birmingham, on Friday 5th July. Tickets are available for this star studded evening via midlandsairambulance.com/maacball19.

On the night, guests will be treated to a drinks reception, award winning three course dinner, live entertainment and opportunities to win a variety of money can’t buy prizes.

Will Mellor, who attended last year’s awards to present an auction prize, said: “I’m really pleased to have been asked back, and this time to present these fantastic awards. Last year was a wonderful opportunity to find out about the amazing support of Midlands Air Ambulance Charity, and it’s clear that everyone involved in the work of the charity is massively passionate about it.

“I look forward to seeing who’s honoured this year, and hopefully we’ll smash last year’s fundraising target of over £130,000.”

Will Mellor is a very widely known actor and singer. He is best known for his television roles, including Jambo Bolton in Hollyoaks, Gaz Wilkinson in Two Pints of Lager and a Packet of Crisps, DC Spike Tanner in No Offence, Steve Connolly in Broadchurch, Georgie in Barking!, and Ollie Curry in White Van Man. He’s also a regular guest on Keith Lemon’s Celebrity Juice.

Joining Will this year is Heart’s long-standing breakfast show host, Ed James. Speaking of the announcement, Ed said: “I presented the awards a few years ago, and it’s a total pleasure to have been asked back again, I can tell the event has grown year on year. I am looking forward to co-hosting with Will as we celebrate the work of the charity, it’s set to be an awesome night of entertainment.”

Ed James is a broadcaster, journalist and entrepreneur who has hosted the Breakfast Show on Heart West Midlands in Birmingham for 17 years, currently alongside Gemma Hill. He recently co-founded full-service content marketing agency HDY and is currently writing his first self-improvement book due to be published towards the end of this year.