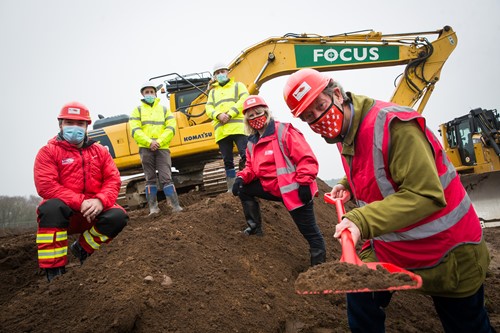 Wednesday 3rd March was a momentous day for Midlands Air Ambulance Charity, as the first spade entered the ground to mark the start in construction of our new airbase and charity headquarters on the Shropshire/Staffordshire border.

The turf cutting event, in partnership with main contractor, Morris Property, signified the steps being taken to future-proof the advanced pre-hospital service, with a new purpose-built facility in the Cosford area, benefitting patients across the whole of the Midlands region.

With the enabling works having now commenced, the project is expected to complete in late 2022.

We continue to face a number of challenges, including the annual rising demand for on scene advanced patient care on scene, the increased complexity of patient needs requiring specialist skills, equipment and medicines, and the current lack of training facilities for the critical care paramedics and doctors.

The new facility, which has been in planning for more than four years, will enhance the charity’s pre-hospital helicopter-led emergency medical service, providing a purpose-built environment for clinical staff, advanced clinical simulation training room, and space for two aircraft, allowing the charity to expand its service in the future. It will complement the charity’s existing air ambulance-led service across the six Midlands counties, providing benefit to those unfortunate enough to suffer a traumatic injury or illness.

Hanna Sebright, chief executive of Midlands Air Ambulance Charity, states: “The development of a purpose-built airbase and charity headquarters has been strategically planned for several years to improve the long-term resilience of the charity and to provide enhanced pre hospital care to people across the Midlands region. Therefore, the turf cutting ceremony was a significant milestone in bringing our vision to fruition.

“This new facility will ensure the critical care team are equipped to treat the increasingly complex patient cases and enhance our daily lifesaving service, featuring a purpose-built clinical training facility and more suitable environment for our aircrew when they return from complex, stressful and challenging air ambulance missions.”

James West, chief operating officer at Morris Property commented: “It is a privilege to be working on this important and well-planned project for such a worthy cause. Undertaking the enabling works signals a major step forward for the charity and its future across the Midlands region.”

More than 90 per cent of funding for the new development has been obtained via major grants from organisations such as the Department for Health and Social Care and the HELP Appeal. In addition, the charity will use a proportion of its modest reserves and undertake fundraising campaigns for specific areas of the new airbase, including the clinical simulation training suite, memory garden and community education zone.

More information on the plans can be found here.