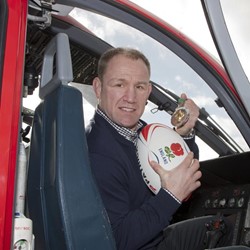 Neil Back MBE is a former International Rugby player and Captain of England and Leicester Tigers. He has represented England Rugby at every level from England Schools in 1985, right through to winning his first full international cap for England, at Murrayfield in the Calcutta Cup Match in 1994 against Scotland.

His illustrious career spans 17 years as a senior player, 15 of those for Leicester Tigers where he won five Premiership Titles, four of which were ‘back to back’ and two ‘back to back’ European Cup Titles. A formidable Flanker, Neil holds the club record for the most tries scored, 125 tries in 338 appearances.

His international career, saw him gain 66 caps for England, four as a winning Captain where he scored 16 tries and is the only English forward to score a drop goal in a test match in the history of the game.

Neil has played in three World Cups and was an integral part of the World Cup Winning Team in 2003. He has also toured on three occasions with the British and Irish Lions and has won numerous awards and accolades as RFU Player of the Year, PRA Players Player of the Year and was also awarded an MBE.

For the last ten years he has been at the forefront of developing and coaching future England rugby stars at Leicester Tigers, Leeds Carnegie and Edinburgh Rugby.

Perhaps most notably, aside from his other sporting achievements, Neil stands alongside an illustrious list of players inducted into the Twickenham Wall Of Fame, often referred to as the Holy Grail of rugby, where players need to have achieved excellence and greatness in their international career.