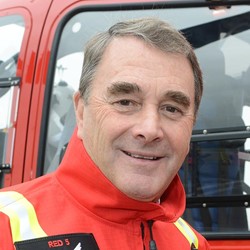 Racing legend Nigel achieved 31 Formula One Grand Prix victories, and is the only person in racing history to have held the titles of Formula One and CART champion simultaneously. He is regarded as one of the greatest ever Formula One drivers of all time.

Nigel Mansell CBE said: “I am delighted to support and raise awareness of the lifesaving work of the Midlands Air Ambulance Charity which has such a close connection to Formula One and motorsport, and to every one of us who drives on Britain’s busiest roads. We only ever appreciate the real value of the air ambulance when we may be unfortunate to either be in a road traffic accident or indeed to witness one.”

“The speed of air ambulances, the skill of the pilots and the critical care on-board with paramedics and doctors is second to none. I fully support the fantastic lifesaving work of the Midlands Air Ambulance and encouraging the public to make a donation and support their work.”