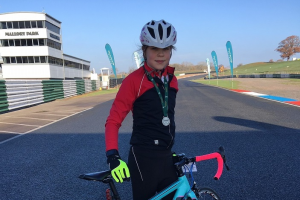 Whilst 95 per cent of our missions take place in the six counties we cover, patient care is borderless. This was welcome news to Amelia Naylor and her family one fateful day.

Amelia was competing in a cross country race for her school in Swithland, Leicestershire, when she crossed the finish line in third place on Wednesday 13th September 2017. She was just 10-years-old at the time, and had no known health problems.

Initially, Amelia said she felt sick and was struggling to get her breath. Shortly after, she became unresponsive. On realisation that Amelia was going into cardiac arrest, the headteacher and Amelia’s mum took turns doing CPR to keep her heart pumping.

Due to Amelia’s age and the seriousness of the incident, the air ambulance based at Tatenhill was immediately dispatched, with pilot Simon Reece, critical care paramedic Karen Baker and Dr Mark Nash on board.

It took less than 10 minutes for the aircrew to arrive at the scene. They initially shocked Amelia’s heart to regain its normal rhythm, and anaesthetised her to keep her stable. She was put on a ventilator, and the aircrew went with her in a land ambulance to Leicester Royal Infirmary.

Amelia spent two days in the Cardiac Intensive Care Unit, where she was sedated, cooled and ventilated. When she woke up on the third day, she was moved to Glenfield Hospital, where there is a specialist heart unit.

It was discovered that Amelia had an anomalous left coronary artery, a defect so rare that there are no documented cases of the same defect in medical journals, only in post-mortems had it been seen before.

Three weeks after her incident, Amelia had surgery on her heart to rectify the fault, and was discharged a week later. She returned to school very soon after her operation, and even took part in her sports day as house captain.

Amelia’s dad, Martyn, recalls her ordeal: “Amelia is truly a miracle. It was an unbelievably stressful time for the whole family, but apart from a few memory issues, Amelia has come out of it unscathed – apart from a scar she is rightly proud of!”

In late 2018, Amelia was discharged by the neurology consultant, who was amazed by her recovery. It was observed that her recovery was largely due to the effective CPR undertaken at the scene and the rapid anaesthetic administered by MAAC’s aircrew.

“I will be on medication for life, and me and my family used to do lots of sports and outdoor activities, but now we have to take it a bit easier,” Amelia commented. “I’m really grateful for Midlands Air Ambulance Charity’s hard work, and I know what they did was very important.”

Amelia now has to carry a defibrillator with her at all times, but has already started to undertake light exercise, cycling with her family and getting back to normal.

Earlier this year Amelia became a world record holder; she was the youngest of 127 cardiac arrest survivors who met to promote CPR training and medical research. She also took part in her first sportive event, and attended the British Heart Foundation awards ceremony in London, where her mum was awarded a CPR hero award for her role in saving her life.

Whilst reflecting on their recent events, Martyn said, “We are a very lucky family, and look forward to a great future together.”