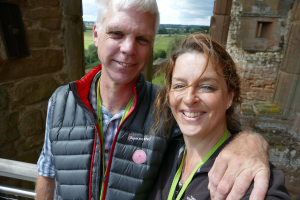 It was a normal Thursday morning for 50-year-old Jonathan Sadler, who was at home near Ledbury in February of this year.

Around 11.30am, Jon suddenly had severe chest pains. After they subsided, he began his journey to work, but they returned almost immediately. He phoned his fiancée, Laura, and returned home.

Laura said “Jon sounded awful, he was so breathless. I knew something was seriously wrong.”

After calling 999, Jon prepared for their arrival by opening all the doors, getting changed and had his medical card in hand. A West Midlands Ambulance Service crew member later noted Jon was the most organised heart attack patient ever.

Due to Jon living in the countryside, it took the ambulance 40 minutes to arrive. Once there, they began taking Jon’s details.

“The next thing I remember is being on my back on the floor,” Jon recalls. “There were now two ambulance crews there – I’m not sure when the second arrived. They all looked very concerned.”

Jon later learned that he had suffered a cardiac arrest, his core body temperature had dropped to 35?C and the oxygen count in his blood was at zero.

During the arrest, Laura arrived and was told what had happened.

“I was hysterical. The paramedic was amazing though, and told me to stay strong for Jon. She said an air ambulance was on its way – I knew Jon was in the most capable hands.”

Due to Jon’s condition, the land crew decided to call for support. Captain Tim Hutchins, Dr John Hulme and critical care paramedic Greg Ambler arrived via air ambulance from the Strensham airbase, and landed in a nearby field.

“The crew were so professional,” recalled Laura. “As soon as they arrived, were briefed by the land crew and assessed Jon, they made it clear that he needed to be taken to hospital by air, or he would die.”

Jon was taken to Worcestershire Royal Hospital. He said: “I have no recollection of the flight at all. On arrival, I was wheeled into a room full of people ready to attach me to numerous machines. It felt like a Formula One pit lane!”

At this point, Jon suffered another cardiac arrest and had to be brought back to life for the second time that day.

During this, Laura was driving the 45 minute journey to the hospital. “While the land ambulance crew were also fantastic, there’s no way that Jon would have survived if he hadn’t been taken to the hospital by helicopter – we just live too far away and they wouldn’t have made it in time. We always say that there were a series of coins flipped on that day, and luckily they all landed the right way up.”

Jon suffered two cardiac arrests as a result of a blocked main artery. It was a defect he had had from birth, and was told he was lucky to make it to 50 without having issues sooner. Thanks to his healthy lifestyle, he’s recovered fairly quickly – but life has been difficult since.

“I now have permanent damage to my heart, and get breathless easily. Mentally I’m okay, I just feel so lucky. You never think something like this will happen to you. Without MAAC I wouldn’t be here.”

Laura echoed Jon’s words: “I am eternally grateful to MAAC. Every day since Jon’s accident is a blessing, and we now appreciate life so much more.”

Since his accident, Jon and Laura have set a date for their wedding: 21st June 2019. They’re also volunteering for various MAAC events this year, including Bike4Life and Strensham Open Day.

Laura donated £250, and Jon’s colleagues raised £250, that they presented at RAF Cosford airbase. Laura and Jon now also donate monthly to the charity.

“I am so thankful and humbled by what happened to me – without a doubt you saved my life.”