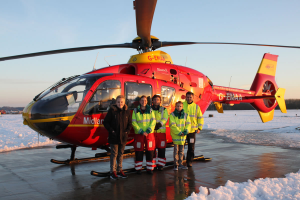 When 13 year old Lewis Pratt arrived at school the last thing he thought he would be doing that day would be leaving by air ambulance.
On Monday 12th May 2014, Lewis simply tripped over at his school in Rugeley (Fair Oak Academy) which resulted in a nasty fractured femur.
Ambulance crews scrambled to the scene to help Lewis who was in agony. Due to the severe nature of his injury the Midlands Air Ambulance was requested. Crew’s on scene gave Lewis advanced pain relief and manipulated his leg back into place before airlifting him the to the major trauma centre at the Royal Stoke University Hospital.

Lewis had to undergo orthopaedic surgery, which left him with a plate in his leg to secure his bones in position and resulted in a 12 day hospital stay. Lewis had to undergo extensive physiotherapy and was unable to return back to school until September.
Now fighting fit, Lewis, his mom and best friend Josh Baker visited West Midlands Ambulance Service’s Staffordshire Hub, where he was reunited with those that helped him on the day and received a tour of the Emergency Operations Centre. Lewis also got the opportunity to visit the Midlands Air Ambulance based in Tatenhill, Staffordshire, reuniting with the crew and pilot from the air ambulance who also helped him on the day. Whilst there,

Lewis got the opportunity to have a look around the helicopter in less traumatic circumstances.
At the surprise visit Lewis said: “It’s really nice to be able to personally thank everyone for all their help. I remember bits from the day but not everything, which I have been told by the ambulance crews is probably a good thing.”
All of the ambulance staff were ecstatic to see how well Lewis is now doing and given the serious nature of his injury were pleasantly surprised that he was walking around without any difficultly.